The History of Moonshine 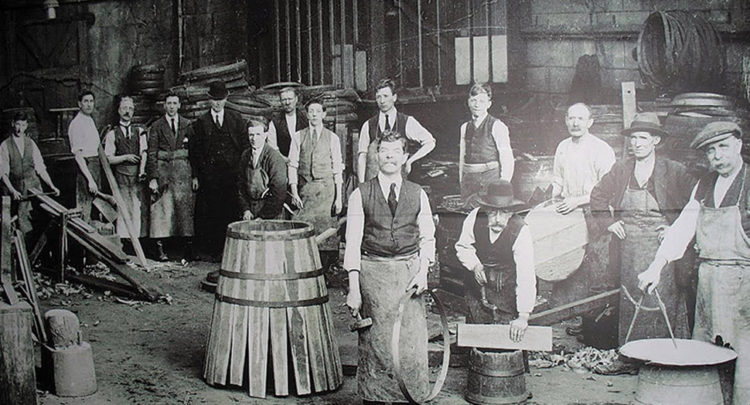 The term moonshine originated in Europe and was used in England during the 1700’s. The name originally referred to “occupational pursuits which compelled night work or work by the light of the moon.” There has to be a good reason to go to all the trouble of making moonshine right. Truth be told, there have been several reasons, but they all come down to one thing….government control of the alcohol trade. Moonshining began very early in American history. Not long after the Revolution, the United States found itself struggling to pay for the expense of fighting the long war. So they came up with a solution, to place a federal tax on alcohol. However, the American people who had just fought a war to get out from under oppressive British taxes and were not particularly pleased about the new idea. So they decided to just keep on making their own whiskey and to completely ignore the federal tax. With the idea that people didn’t want to pay the new taxes they began what would be known as bootlegging.  The expression “bootlegging” has a long history in itself. It originated in colonial America in the early 1600’s, and it believed to have been used in reference to selling alcohol to Native Americans. Some colonists tried to prevent the idea, but those that were more determined attempted to trade “spirits” for material goods. These determined colonists concealed bottles of liquor in the top of their boots and covered the bottles with their pants leg, creating the term “bootlegger.”

For early moonshiners, making and selling alcohol wasn’t a hobby or a way to make extra cash, it was how they survived and took care of their families. Farmers could survive a bad year of crops by turning their corn into profitable whiskey, and the extra income helped make harsh frontier life almost bearable. To these people, paying the tax meant they wouldn’t be able to take care of their families. Federal agents, called Revenuers, were attacked when they came around to collect the taxes, and in fact several were even tarred and feathered. All this resentment from these taxes finally explodes in 1794, when several hundred angry citizens took over the city of Pittsburgh, Pennsylvania. President George Washington called for a gathering of militiamen under federal authority and thirteen-thousand troops dispersed the mob and captured its leaders. This was referred to as the Whisky Rebellion, and was the first major true test of federal authority for the young government. Despite the failed rebellion, moonshining would continue throughout the United States and in such places like Kentucky, Virginia, the Carolinas and other southern states. Excise taxes on alcohol didn’t go away so moonshiners would avoid the law at all cost. Soon gun fights between moonshiners and revenuers would become the stuff of legend. These battles escalated in the 1860s as the government attempted to collect more excise tax to fund the Civil War. Moonshiners and the group known as the Ku Klux Klan joined forces, and many battles would ensue. The tactics of the moonshiners grew more desperate and vicious, intimidating locals who might give away the locations of stills and attacking IRS officials and their families. The tide of public opinion began to turn negative against the moonshiners. The temperance movement, which was seeking to ban alcohol, gathered steam as the United States headed into the 20th century. In the early 1900s, states began passing laws that banned alcohol sales and consumption all together, and in 1920, nationwide Prohibition took effect. However, this was the greatest thing that could have happened for the moonshiners. Suddenly, there was no legal alcohol available and the demand for moonshine skyrocketed. Moonshiners couldn’t keep up with the demand, which in turn led to cheaper and more sugar-based moonshine which was lower quality and more watered down. The distillers were doing anything they could to increase their profit. Organized crime boomed and the idea of speakeasies was sweeping the nation. When Prohibition was finally repealed in 1933, the market for moonshine soon grew dried up. Although moonshine continued to be a problem for federal authorities from the 1960’s until today, very few illegal alcohol cases ever went to court. Large commercial distilleries are able buy raw materials on such a large scale that even with the taxes they must pay their products aren’t much more expensive than moonshine. While some counties in the south remained alcohol-free for decades after the end of national Prohibition, eventually even those localized liquor bans would fade away. This idea would leave consumers of alcohol little reason to seek out moonshine other than the temptation of buying and drinking something that’s illegal. The desire to flout government authority is one of the reasons moonshining exists in the first place.

Although the general process for making moonshine doesn’t differ too much from the way commercial distilleries do it, there are a few reasons why drinking illegal liquor can be a gamble. The whole point of making moonshine is to escape laws, taxes and regulations. That means that there are no FDA inspectors stopping by the backwoods to make sure all regulations are being followed. Moonshiners haven’t always been known for their careful care of sanitary conditions. It is not uncommon for insects or small animals to fall into the mash while it’s fermenting. You might have even heard stories about people drinking moonshine and going blind, or even dying. These stories are not urban legends, they’re true. During Prohibition when moonshine was made and sold in underground night clubs across the United States, thousands of people died from drinking bad moonshine. There isn’t anything inherently dangerous about moonshine, or at least no more dangerous than any other alcoholic products. When made properly, it is simply a very strong alcohol with a very hard taste because it hasn’t been aged. It is usually very potent, and can have a proof as high as. That high alcohol content can be pretty dangerous in itself. Some distillers realized that part of the appeal of moonshine was that “kick.” They experimented with different ingredients to add more kick to the drink, including manure, embalming fluid, bleach, rubbing alcohol and even paint thinner. Many of these ingredients were extremely dangerous, and many people died from drinking it. Besides poisonous ingredients, there are at least two manufacturing mistakes that can lead to a poisonous batch of moonshine.

* It usually takes two or three passes through the still to remove all the impurities from the alcohol. One pass may not be enough to create a safe batch.