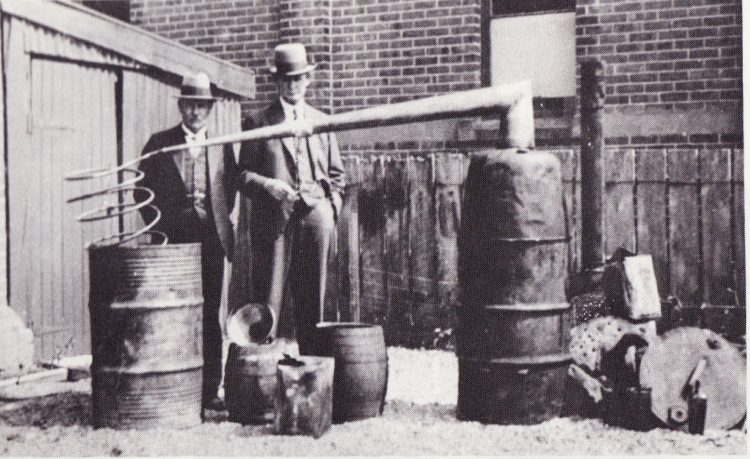 You might have a vague idea about the ingredients in your favorite spirits. Example, the bourbon is made with corn or a cognac from grapes, but what is the process that turns the corn on the cob you envision into whiskey? It’s simple….DISTILLING!

Here’s how distillation works. The spirit-making process begins with base materials, which must either contain natural sugars (like fruit juice) or be converted into a sugary liquid called a mash. The mash or juice is then fermented to create the alcoholic wash, which is then distilled, with its components heated and separated to concentrate the alcohol. After distilling, a spirit may undergo aging, flavoring, coloring, or other altering to attain a specific style or flavor. Each step that distillers take along the way will affect the flavor, consistency and alcohol level of the final product you end up coming to know and love.

The base product is the workhorse of the spirit flavoring. Common materials used in distillation have typically reflected the history and culture of the area where each spirit is made. Traditional base materials can include:

Base materials that are already sweet and full of sugar, such as fruit juice and molasses, are ready for fermentation, in which yeast converts the sugar into alcohol.

Grains and starches first require conversion of their starches into fermentable sugars. Distillers can convert many grains such as wheat, corn, and rye by simply by grinding them into a fine powder and then mixing the powder with water to create the mash. The mash is heated in a big pot known as a mash tun, where the starches in the grains break down into the sugars needed for fermentation. The grain barley, used to make scotch and other whiskeys, requires additional steps known as malting to release sugars. The barley seeds are first soaked almost to the point of germination, developing enzymes that convert starch into sugar, then dried in a kiln. Like other grains, the barley is ground into powder and mixed with water to make the mash.

Once the mash has sufficient sugar content, or the fruit has been juiced, yeast is added to begin the fermentation process, converting sugar into alcohol. Selecting the right yeast is a key part to shaping the style of the final product, as different yeast species produce different flavor profiles. Fermentation creates a number of different alcohols, the most important of which is ethanol, which is the main component and most desirable alcohol found in wine, beer and spirits.

The temperature of the mash can have major effect on the congeners, the chemical compounds that add flavor and character to the spirit. Cooler fermentations will take longer, leading to the development of more complex congeners which add more aromas and flavors. These components can change during distillation and maturation as well. The liquid emerging from fermentation is known as the wash.

Distillation is the process to heat to separate various components of the mash. In the production of spirits, distilling is the action of separating alcohol and water using heat to concentrate the alcohol. Boiling the fermented mash separates its components due to different parts of the mix will boil off at different temperatures. The first vapors to run through are called heads, then hearts, and the last to come off are tails. Each contains a mixture of the substances found in the original wash, but at different concentrations.

The heads contain the highest concentration of components that boil at a lower temperature, which includes the unwanted alcohols such as methanol. The hearts contain the highest concentration of the most desirable parts of the alcohol, such as esters that add floral and fruity notes to the mix. Tails include the remaining water and other alcohols, a small amount of which can add character to the spirit.

The integral piece of equipment in this process is the still. Two general categories cover the many different types of stills used in spirits production: those that use batch processing, and those that perform continuous processing. Batch processing, using a traditional pot still, requires distillers to run the process once, remove the distillate, clean the still, and then start over with the distillate, repeating the process until the spirit reaches the desired purity level. Continuous or column stills, on the other hand, allow distillers to continually add the wash, which is processed through various tanks or columns, to produce a very pure product that does not need additional processing.

All spirits emerge from distillation as clear and colorless liquids whose alcoholic strength and level of flavoring depend on the base materials, fermentation techniques and specific distillation process. For example, batch processing in pot stills produces a distillate with lower alcohol levels and more character, while continuous distillation produces higher alcohol levels and a more neutral product. Distillers may use additional ingredients to give flavor and color to some spirits. Brown spirits such as whiskey traditionally gain color and other characteristics from aging in wooden barrels. Distillers usually age spirits in barrels at full concentration (which may be as high as 90 percent alcohol or 180 proof) and then cut with water just before bottling. Evaporation during aging also reduces alcohol strength, releasing what distillers call the “angels share” of the spirit.

The choice of barrel material is based on a number of things such as, whether the barrels themselves are new or re-used, small or large, lightly toasted or heavily charred inside, which all affect the final spirit color and flavor. Wood origins also matter as well, with American oak providing more vanillin and French oak imparting light vanilla and softer, spicy notes. Lastly, before or after maturation, some producers may blend spirits for additional refinement and balance of style and flavor. Sometimes this means blending from various barrels within a single distillery. Or, as Scotland and Ireland do it, it often means blending spirits from various distilleries. When the blend includes components from various years, the age listed on the bottle is from the youngest spirit in the blend. Whiskeys made from malted barley, from a single distillery bear the label “single malt.” Once bottled, spirits, unlike wine, do not evolve with age, although they can last a long time when stored properly.